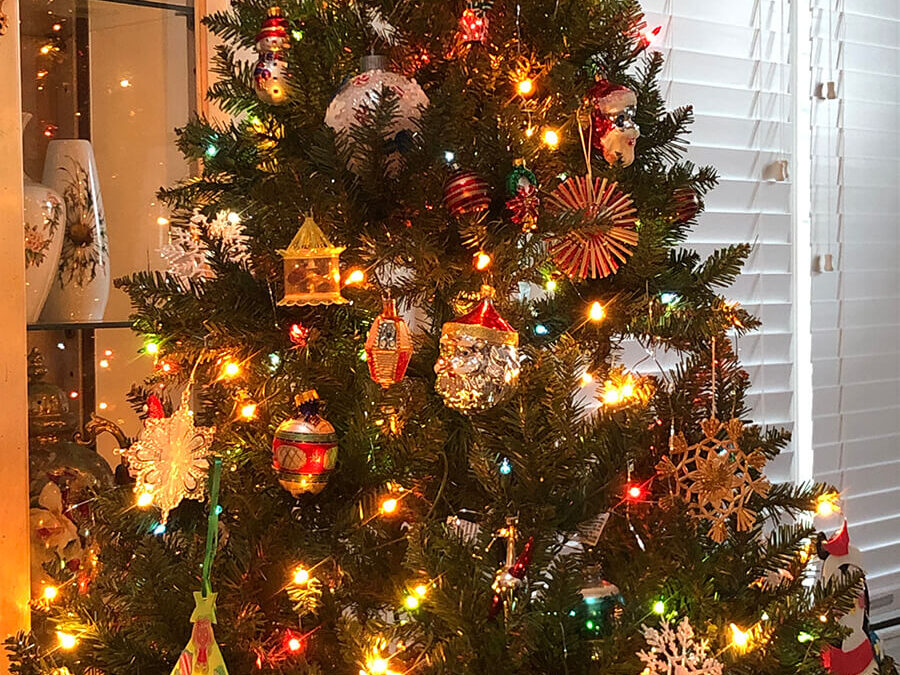 Once in a while, you have what starts out as a normal holiday but ends up changing you forever.  That’s what happened to me when I got my first puppy.  It was around midnight on Christmas Eve when I stumbled down the stairs as a seven-year-old in my flannel pajamas.  My parents had awakened me from slumber to discover what Santa brought.  In the arcs of streetlight outside the living room window, I thought I could see the tracks of his sleigh and reindeer.  Inside, the Christmas tree lights were haloed and the smell of fir hit me with a smack of aliveness.  I was groggy, but not so much that I didn’t comprehend how lucky I was to have this family.  What had I done to deserve it?

My connection to Santa was strong, too, judging by the candy cane wrapped boxes under the tree and the missing gingersnap cookies from the plate I’d left out on the dining room table with a note: “Enjoy these, Santa!”  I lowered my eyes out of reverence, aware of a greater presence, that Santa had magical powers.  And something else reverberated, a faint impression of time spent elsewhere and that could only be the orphanage where I’d stayed that first year of my life.  Maybe it was from the sorrow I felt when I looked at posters of children who had no toys under their Christmas tree.  It was all jumbled up inside of me, guilt and glee and uncertainty.

Here I was in our comfy house hear Philadelphia among all this glittering bow tied wonder.  There was nowhere to turn with my fear that I might somehow loose this too, and besides, I knew I was supposed to be glad.  It was just lucky that as I teared up, I caught a gleam in my periphery from under one of the sofa pillows.  It was a puppy!  I ran towards it and coaxed the tumbling bundle into my arms. She was a Beagle with soft brown, white and black fur and a pink tongue that was wet and warm.  My parents sang in unison, “Surprise!  Merry Christmas!”

I immediately called this tiny licking, wagging, freckled beauty Twinkles.  Little did I know that Twinkles could calm my strange feelings.  As an only child, she became my companion, a sibling, and a playmate, and finally, a confidante who nuzzled and soothed me no matter how perplexed she might be at my unsettled state.  Somehow my parents had known this.  Now, Mom directed me to my stocking and gifts.  But I was already in love with Twinkles.

Later that Christmas Day, I tiptoed out of our kitchen.  Twinkles snored softly in her bed.  I closed the door with a promise to come back soon and blew her a kiss.  My parents and I piled into my father’s two-toned Ford for the ride over to our Grandmother’s house where Aunt and Uncle Sam lived with my cousins, the other grandchildren, Joyce, Karl, and Paul.  It was nothing like our house with all the chaos: you couldn’t get from the living room to the dining room without stepping over fire trucks, toys, dolls clothes and snacks on paper plates.  Their dog, a German Short-haired Pointer named Ajax, would be tied up outside, howling in protest.  My mom and I were dressed in our matching poodle skirts with sequined Santa appliques and my dad wore a red turtleneck and pressed gray flannel slacks.  Just knowing now that Twinkles was at home in her cozy, blanketed crate took the terror out of my world.

It was a special holiday anyway, because my Granny was the best cook in the world.  That night she’d make homemade square pasta stuffed with herbs and ham in a bullion soup, and then a giant baked ham with charred pineapple and all the trimmings.  The aromas from the kitchen made my knees buckle.  Christmas dinner is the celebration of all that made us fortunate, and I especially counted Twinkles in that.  Afterward, Granny and I would walk over to neighbors who couldn’t make it to dinner because of they were sick or too old, our arms loaded with ham for sandwiches, warm potato salad and fresh broth soup.  Now I cannot enjoy a holiday meal without doing something for someone who doesn’t have as much as we do, or, who’s trapped in their home alone with no one – and that’s a gift in itself.

What we could never have foreseen is that one afternoon during that first Spring together, as Twinkles and I played in the stairwell, she bit me.  Hard, searing, and violent.  How had this happened?  Twinkles had snatched a Kleenex out of the bathroom trashcan.  Reeling toward her, I tore it out of her mouth, and it shredded.  Bits of tissue fell as I pulled on disintegrating tissue.  She followed the snowflake sized fragments into the air and Twinkles flew too.  She crashed into me, her puppy canine teeth tearing through my lip.  The pain was electric, pulsating.  We were stunned.

As if I’d been betrayed by my greatest love, I wailed.  Gasping the metallic odor of blood, and Twinkles’ frightened acrid breath, the stairs spun around.  Blood, spurting out of my mouth made me terrified of staining my mother’s carpet.  I clomped the remaining Kleenex shreds onto my face and ran downstairs into the kitchen.  The blood seeped through my fingers and down my checkered top.  “Sorry,” I warbled to my mother, who was standing by the counter with an electric mixer that whirled through vanilla cake batter.  She snapped it off.

My mother’s eyes were wide, like when she watched a Hitchcock horror story. She screamed, “Oh my God. What’s this?” lurching toward me, lifting my fingers.

I shook my head, not knowing what to say. Should I defend my beloved pet?

“You have to tell me what happened!  Is it a cut from glass or what?”

“The dog …,” was all I could say.  My mother threw her dishtowel onto my face.

“Hold this!” she commanded and wrapped another one with ice in it around me.  She ordered me to stand there like my head was mummified, while she headed outside to find a neighbor to drive us to the local hospital, about five miles away.  I wondered about this, because although I was now deadly calm, the panic was rising in me.  Through the screen door I heard the neighbor, Mrs. Johnston, say, “I’ll be right there!  Don’t drive yourself, you’re too upset.”  My head throbbed with pain by that time and fear made my stomach somersault.  Tasting the blood on my tongue sickened me even more in the reeling heat of the kitchen with the saccharine smelling cake intertwined in the airlessness.  Twinkles was gone.  Then a couple minutes later, my mother burst through the back door, yelling, “Come on!  Get in the car!”

We got to the Emergency Room in a blur with Mrs. Johnston’s hands shaking at the wheel, cursing at red lights, and dropping us at the automatic hospital doors.  After a few interminable minutes in the plastic covered seats, with dozens of other kids staring and a dad with a lawn mower cut finger, were ushered in to see the doctor.  Was that right?  I felt guilty.  But my mother insisted we see someone right away.

The antiseptic smelling Dr. Dennis staunched my lip, shot a syringe in the part that felt on fire, and plunged in with a fine needle and thread.  It was odd to see him sewing my face, an inch or so below my crossed eyes.  I watched as he slowly dipped in and out; seven stitches outside and seven inside that I couldn’t see.  My mom leaned in the doorway, grew pale, and turned away.  Afterward, numb and swollen, I robotically veered to the car holding hands with my mother and the aproned Mrs. Miller.  She clucked and said, “There, there, dear.  It will be all right.”  By now, I realized that there was a chance it would not be all right, and that I would be what my mother whispered to the doctor in query, “disfigured?”  My face felt absent and inside I did, too.  I knew that we, my parents and I, were to leave that night for a weekend on our boat at the Chesapeake Bay, including Twinkles:  We couldn’t jeopardize the long-awaited weekend.  “How could she do this to me!” I demanded through my bandages in the backseat.

My mother replied that, “It was an accident,” Although I didn’t understand how, she said I should forgive Twinkles.  When we got home, I called meekly for Twinkles, but she was hiding in exile.  I sidled toward Twinkles’ muffled cries with my mother by my side.  My puppy was crouched behind the sofa.  Recognizing her shame, I dropped to my knees.

“I know it was not your fault, Twinks,” I said, thinking I was sure it wasn’t mine either, “And I still love you.”  Twinkles looked out of the tops of her brown eyes and closed them again.  I scratched her ears until her body untensed and she finally met my gaze.  For a long while, we sat there with Twinkles curled in my lap, whimpering when I spoke to her.  It no longer mattered whose fault it was. Until Twinkles stretched her neck and licked my cheek, I couldn’t let go of this notion that my being blamed for most everything as an only child had stung.  And now I’d tried to vent it to Twinkles, who I knew instinctively didn’t deserve the hurt.  Upstairs in my room, I packed my duffle bag, with clothes I barely saw as I piled them in.  So many feelings to put into order, but I had only one sensation.  I had to be the bigger person here and that felt good.

Obsession In the Age of COVID-19: How do we manage thoughts in an overwhelming time?