America Calling : A Foreign Student in a Country of Possibility We talk about life, liberty and the pursuit of happiness, as our founding fathers declared, but is it for everyone? Growing up in middle-class India, Rajika Bhandari has seen generations of her family look westward, where an American education means status and success. But she resists the lure of America because those who left never return-they all become flies trapped in honey in a land of opportunity. As a young woman, however, she finds herself heading to a US university to study, following her heart and a relationship. When that relationship ends and she fails in her attempt to move back to India as a foreign-educated woman, she returns to the US and finds herself in a job where the personal is political and professional: she is immersed in the lives of international students who come to America from over 200 countries, the universities that attract them, and the tangled web of immigration that a student must navigate. An unflinching and insightful narrative that explores the global appeal of a Made in America education that is a bridge to America’s successful past and to its future, America Calling is both a deeply personal story of Bhandari’s search for her place and voice, and an incisive analysis of America’s relationship with the rest of the world through the most powerful tool of diplomacy: education. At a time of growing nationalism, a turning inward, and fear of the “other,” America Calling is ultimately a call to action to keep America’s borders-and minds-open. International students and immigrants have been the secret ingredient in America’s recipe for global success. America Calling shares one immigrant’s story, a tale that reflects millions more, and shows us why preventing the world’s best and brightest from seeking the American Dream will put this country’s future in jeopardy. At a time when immigration could not be more important, Drop In with us to hear firsthand the impact of coming to America — both for the person and for our country. 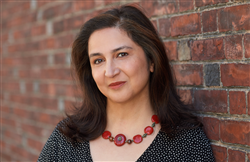 RajikaBhandari-045-LG_cropped.jpg Photo credit: Eve Prime A global expert in international education, Rajika Bhandari is the author of six academic and nonfiction books and several publications that touch upon the themes of movement, migration, and crossing borders. She has written for the Guardian, Times Higher Ed, the Huffington Post, the Chronicle of Higher Education, University World News and Diplomatic Courier; been featured on NPR, PRI International and Voice of America; and been quoted in the BBC, the Wall Street Journal, the New York Times, the Times of India, and Time, among others. With a career in education that spans over 25 years, Rajika has held senior leadership roles in the private, academic, and nonprofit sectors and is a widely regarded thought leader in international education. She served most recently at the President and CEO of the IC3 Institute, prior to which she spent over a decade at the Institute of International Education (IIE), one of the world’s oldest and largest international education nonprofits, where she led IIE’s research, impact and thought leadership activities, including the flagship Open Doors Report on International Educational Exchange–the most definitive resource on international students and scholars at U.S. colleges and universities and Americans studying abroad. Rajika has served on the U.S. National Commission for UNESCO and was one of 100 recipients worldwide to be awarded an IIE Centennial Medal in 2019. Drop In!