Seventeen-year-old Jane’s a very brave boy. And a very difficult girl. She’ll become a remarkable woman, an icon of her century, but that’s a long way off. A tomato-picking, dust bowl immigrant from Texas to California, Jane is manipulated into a terrible fight with her parents, leading her to leave her father for dead in an irrigation ditch. She steals her mother’s Ford and escapes to Depression-era San Francisco, where she fakes her way into work as a newspaper copy boy. Everything’s looking up. Freed by her false male identity, she’s climbing the ladder at the paper, winning validation, skill, and connections with the artists and thinkers of her day. But then her father reappears on the paper’s front page, his arm around a girl who’s just been beaten into a coma. Jane’s got to find her father before he finds her, and before everyone else finds her out. Copy Boy explores the lengths we’ll go to secure our own spirations, and the ties that bind us to family, no matter what. Otherness. 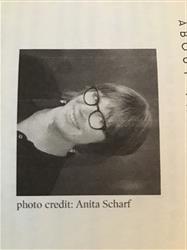 Shelley Blanton-Stroud grew up in California’s Central Valley, the daughter of Dust Bowl immigrants who made good on their ambition to get out of the field. She teaches college writing in Northern California and consults with writers in the energy industry. She co-directs Stories on Stage Sacramento, where actors perform the stories of established and emerging authors, and serves on the advisory board of 916 Ink, an arts-based creative writing nonprofit for children. She has also served on the Writers’ Advisory Board for the Belize Writers’ Conference. Before all that, she wore a series of polyester uniforms in service to Der Wienerschnitzel, H Salt Seafood Galley and Wendy’s Old Fashioned Hamburgers. Copy Boy is her first novel. Her second, Trophies, will be published by She Writes Press in Fall 2021. She and her husband live in Sacramento with an aging beagle and many photos of their out-of-state sons whom they miss too too much.

Have you ever stopped to think about yourself and your story? If someone were to write your memoir what would it say? We all seek some level of authenticity but have trouble removing the labels and finding our whole story. Welcome to Dropping In with Diane Dewey. In this program we’ll explore diverse stories on identity to help determine what is truly yours. Now here is your host Diane Dewey.