No false notes: Books that grip and twist and stay true are Andre Dubus’ specialty. Townie, his memoir, is a story of survival, but also inter-connectedness. In a cynical world, Andre Dubus drives us straight into the emotional center of his life, omitting detours, often without seat belts. Transcending the urge to punch a bully in the face — often sending him to the hospital — Andre Dubus learned the verbal powers of persuasion: Knives were dropped, fists were lowered, and a tentative inner peace emerged. For anyone who has experienced anger management issues, this reckoning will resonate. It is one man’s story of gaining mastery, awareness, self-control and access to his native talents. It’s about tuning into becoming a vessel for creativity and intuition so as to channel characters, their drives and dreams and realizations of truth & lies. The writer knows what it means to be human; from boxing, loss, & living without, to deciphering what’s real. We come away stronger for it. 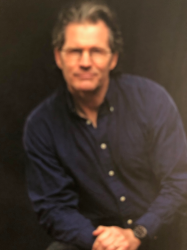 As a young boy, Andre Dubus III settled in Haverhill, MA, a mill town along the Merrimack River, with his single mother and three siblings. His father, the short story writer Andre Dubus II, was an indelible yet absent presence. Andre soon discovered power, physically as a boxer, then through words as a writer. Bestselling novels that Mr. Dubus has written include The House of Sand and Fog, The Garden of Last Days (soon to be a major motion picture), The Cage Keeper and Other Stories, Bluesman, and a novella collection, Dirty Love. His novel, Gone So Long, is on The Boston Globe’s list of The Best Books of 2018. Among prestigious awards are his Guggenheim Fellowship & two Pushcart Prizes. Mr. Dubus’ books are published in over twenty-five languages and he teaches full-time at the University of Massachusetts, Lowell. Nearby, he and his wife Fontaine, have raised three children. Mr. Dubus joins us while teaching a workshop at Eckerd College, Writers in Paradise, St. Petersburg, FL.