Api’s Berlin Diaries: Gabrielle Robinson on Confronting the Past

Hello, Rest of My Life When Danny Maytree, an ambitious young 1970s film actor, met Samantha on a blind date and fell in love, he decided he no longer cared about Tinseltown stardom. He still acted sometimes, but he became a writer too. Now married and in their seventies, they find a dog whose faded tag has the name “Tali” and a Beverly Hills phone prefix from fifty years earlier. Writing a time travel novel in 2021, Danny gets a call from a mysterious, velvet-voiced acting agent. He has a meeting tomorrow. Now, Danny is in Beverly Hills—not at the meeting, but in the elegant home where he lived in 1974, forty-seven years ago. He is twenty-seven again, bewildered, but with a second chance at his Hollywood dream. He doesn’t want it, because Sam is not in this world. Unhappy in his new “now,” he realizes his journey back to “Kansas” hinges on the magic of film. A sharkish agent helps him navigate Hollywood’s rocky shoals. A worldly-wise teen and a New Age fortune-teller offer spiritual advice. And a sexy wicked witch throws a monkey wrench in his path. Drop In with us to find out how it all ends — or doesn’t! 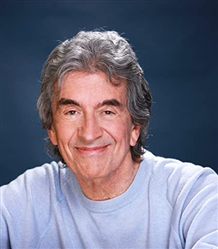 ABOUT THE AUTHOR, RICK LENZ: When Rick Lenz retired as a stage and film actor (playing opposite Ingrid Bergman, John Wayne, Lauren Bacall, Walter Matthau, Peter Sellers, etc.), his passion for drama refused to retire with him. Although he was an actor most of his life, he was also a seasoned writer. His plays have been produced Off-Broadway, on PBS television, and in regional theatres across the country. Rick’s memoir North of Hollywood was called “masterful” by Writer’s Digest. His first novel, The Alexandrite was named “one of the best books of the year” by Kirkus Reviews. Bret Easton Ellis called it “almost impossible to put down.” Rick’s books have won several awards, including Readers Views (first place), the Chanticleer Somerset Grand Prize for Literary, Contemporary and Mainstream Fiction, an IPPY Award, and a Foreword Book of the Year. He lives in L.A. with his wife Linda and an ever-shifting array of animals. Rick has written one memoir and three novels. Drop In with us to discover his latest, Hello, Rest of My Life. We can relate!