How does a girl become an empowered woman? Born when girls were to be housewives and mothers, a Dutch “daddy’s girl” in Nazi-occupied Amsterdam learns about female empowerment when her father is deported to a POW camp in Germany and her mother joins the Resistance. Freedoms taken for granted are eroded with escalating brutality by men with swastika armbands who aim to exterminate those they deem “inferior” and those who do not obey. “Don’t let them make you afraid,” her mother says, when their city is plunged into darkness in the final months. “The warmth and the Light will return.” As mother and daughter fuse in a symbiotic bond, she absorbs her mother’s strength and faith. She learns about moral choice and forced silence. Her hidden Jewish “stepsister” is betrayed and her mother interrogated at gunpoint. Mother and daughter suffer near-starvation and narrowly escape death on the day of liberation. What happens when her family is reunited. How does Hendrika become truly herself? 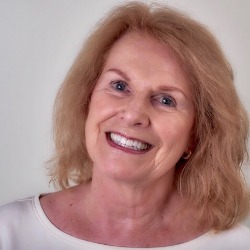 Author of When a Toy Dog Became a Wolf and the Moon Broke Curfew, Hendrika de Vries’ life experiences, from the dark days of Nazi-occupied Amsterdam as a child, through her years as a swimming champion, young wife and mother in Australia, and a move to America in the sixties, have infused her work as a therapist, teacher, and writer. Hendrika holds a BA (with Phi Beta Kappa) from the University of Colorado, an MTS (cum laude) in theological studies from Virginia Theological Seminary, and an MA in counseling psychology from Pacifica Graduate Institute. On When a Toy Dog Became a Wolf and the Moon Broke Curfew: “This beautifully crafted memoir reminds us that we are never far from oppression by those who wish to silence us.”–– Maureen Murdock, author of The Heroine’s Journey: Woman’s Quest for Wholeness. Drop in with us to hear about it firsthand from the author who lived it! This story is amazing, a riveting page-turner that inspires those finding their way — which is all of us.