Come with us as we travel to Mauritius, to look at a beautiful turbulent country through the lens of a you boy. In the 1950s, Vishnu Bhushan is a young boy yet to learn the truth beyond the rumors of his family’s fractured histories – an alliance, as his mother says, of two bankrupt families. In evocative chapters, the first two decades of Vishnu’s life in Mauritius unfolds with heart-wrenching closeness as he battles to experience the world beyond, and the cultural, political, and familial turmoil that hold on to him. Through gorgeous and precise language, Silent Winds, Dry Seas conjures the spirit and rich life of Mauritius, even as its diverse peoples live under colonial rule. Weaving the soaring hopes, fierce love, and heartbreaking tragedies of Vishnu’s proud Mauritian family together with his country’s turbulent path to gain independence, Busjeet masterfully evokes the epic sweep of history in the intimate moments of a boy’s life. Silent Winds, Dry Seas is a poetic, powerful, and universal novel of identity and place, of the legacies of colonialism, of tradition, modernity, and emigration, and of what a family will sacrifice for its children to thrive. Drop In with us to hear this compelling story, so relevant to people in flux today. 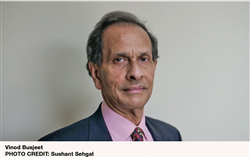 As told in his own words Vinod Busjeet describes himself this way: Born in Mauritius, a multicultural island in the Indian Ocean, I was educated at the Royal College Secondary School, then studied in Madagascar at the French university Charles de Gaulle, and US at Wesleyan University (Connecticut), New York University and Harvard. I have worked as a secondary school teacher in Mauritius, an international banker at the World Bank and the International Finance Corporation in Washington DC, and a diplomat. After 29 years in economic development, finance and diplomacy that took me to over 50 countries, I turned to writing. My first attempt was a screenplay, Murder in the Gold Jungle, an environmental thriller set in Brazil. It is in search of a producer. My novel Silent Winds, Dry Seas followed. I hold dual citizenships – USA and Mauritius. In my ideal world, there would be no national passports. I consider myself a world citizen.